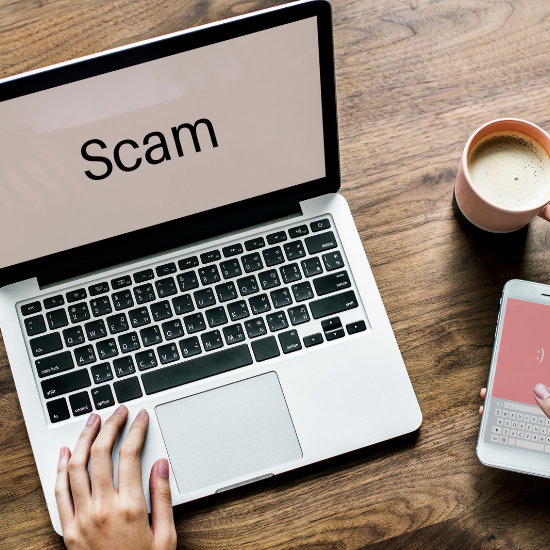 Unless you  live in a cave you have probably been targeted by at least one phone call trying to scam you in one way or another. Whether it is someone ringing you about your accident (erm what accident?) or someone trying to find out your banking  details or passwords, in this digital age, we all need to be a bit savvy and even more wary.

I have recently been getting a lot of messages left on my home phone answer phone, claiming to be BT Technical Department and wanting me to ring them urgently or press option 1 or whatever because my internet security has been compromised. Well for starters I don’t even have my internet with BT so the scammers obviously weren’t the brightest students at scam school.

The phone call I got from them yesterday went a bit like this:

Scammer: Hello ma’am (get me, being called ma’am – perhaps this instilled a level of self importance and confidence in me, so one nil to me so far!)

Scammer: We are afraid that there has been suspicious use on your internet but don’t worry we will help you fix it.

Scammer: so are you on your device at the moment?

S: So look at the bottom left hand corner of your keyboard, there should be a button that says A L T

A: so is what does the button next to it say?

S: Great so what is the other side of the ALT button?

Me: I’m not sure, just a little picture.

S: So that little picture like a windows sign, I want you to press that button and keep your finger on it and then press the R.

Me: So what will that do?

Anyway I turned it round and started asking him questions about where he was ringing from and he said London. I asked for the phone number and he said 00441793596921.  Now even if you are not based anywhere near London I’m sure that you will work out that isn’t even a genuine phone number, let alone a London number, he said his name was Kevin Lewis which I don’t believe either… in the end I asked if he would like to speak to my sergeant as he is quite interested in what he has to say and he said he thought I was the main internet user.   He argued with me at this point and I think I possibly may have been a little (ok a lot) rude to him and put the phone down.

Now my reason for posting this is because had a been a vulnerable person, for whatever reason, I might have followed his instructions or believed what he was saying.

If I had pressed the windows button and R together this would have created a run command in my computer that could have listed errors and information, to be honest this would have been a bit beyond me now and I may have been concerned at errors on my computer.  “Kevin” would have probably tried to convince me that my computer has been hacked by half the world but would have played my knight in shining armour and said he could sort it for me.  This ‘fixing’ would probably have involved him telling me to type in several commands to infiltrate my computer and then getting me to install all sorts of suspicious malware, spyware etc.

I did report this to BT and it is a major problem that people are encountering at the moment.  I know they have tried to phone me loads of times so chances are they have phoned you too.

So please don’t think I’m being patronising, I really don’t want to sound it, but just a little bit of advice, if anyone phones you to say your internet has been hacked into or compromised – it probably hasn’t been.  Don’t even entertain these idiots they aren’t worth your valuable time.  Do alert BT though if you can, or whichever company they claim they be from.  I wouldn’t  want anyone to be duped by these horrible people who are just out to con or scam people.

This site uses Akismet to reduce spam. Learn how your comment data is processed.

I’m Fiona, a UK blogger trying to live a positive life. I love cats, dogs, animals, cooking, flowers and pretty things, in no particular order. I have lots of time for nice people and I’d love to help you have a positive outlook. I write about my experiences, lifestyle, and sometimes just random thoughts.

So there have been no tinned tomatoes in the shops for days and this is usually one of our staples. Hey ho! We managed to get some fresh tomatoes and with onions and garlic we’ve got our own ‘non-tinned’ tomatoes. I really hope everyone is ok this is a horrible time but we need to all stay safe and take it seriously. #stayinghome for everyone #backtobasics #blogginglife #staysafeeveryone
Life feels a bit grim at the moment doesn’t it? There’s no food or other essentials in the shops and everything feels really uncertain...so please can we share good news - however small - to share a bit of happiness. I’ll go first. I had a ((painful)) steroid injection in my foot today but hey guess what - for the first time in over TWO YEARS my foot actually doesn’t hurt 😃 I don’t know how long it will last, but for now I am soo thankful 😀🙏. . . . #positivity #positiveenergy #tryandbepositive #happynews #happiness #positivityblogger #lifestyleblogger #blogginglife #surreyblogger #surreybloggercollective
Practice makes perfect!! We had no idea that we would be able to put such a complicated Ikea wardrobe together and it took us a while but we got there in the end. We did the basic one first and then this one. I am so pleased with it too 🥰 Thanks for your help @ikeauk and your Bromley planning studio 😊 . . . . . #ikea #ikeahome #ikeahomedecor #ikeainspiration #ikeawardrobe #wedidit #diy #diyhomedecor #diyproject #home #homesweethome❤️ #homedesignideas #storageideas #storagesolutions #loveikea #ikeauk #lifestyleblogger #lifestyleblogging #blogginglife #positivityblogger #positiveblogger #sunraintea #happydays #discoverunder500 #houseandhome
I saw this on an email I received this morning and thought it would be lovely to share 💖 . . . . . #positivevibes #positivityquotes #positivity #morganharpernichols #morganharpernicholsquote @morganharpernichols #ripl @ripl #growth #learningeveryday #discoverunder1k #discoverunder500 #lifestylebloggers #surreybloggers #blogginglifestyle #blogginglife #sunraintea #inspirationalquotes #lovelife #lovelifequotes #lovelife❤️
Sorry another breakfast photo! It’s good for me to write how good eating healthily makes me feel 💗 then when I ‘think’ I want to eat junk I’ve got a log to tell me that actually no I don’t! I’ve got a day off work today with loads to do but after I’ve written my list I’m off shopping while I’m in the frame of mind to buy nutritious food 🥑 Hope you have a good day whatever you are doing 😀 . . . #tryingmybest #tryinghard #needtogetfit #needtogetfitagain #healthyoutsidestartsfromtheinside #healthylifestyle #lifestyleblogger #lifestyleblogging #surreyblogger #discoverunder500 #discoverunder1k #healthyfood #healthybreakfast #avocado🥑 #mondaymotivation #mondayvibes #mondaymorning #mondaymonday #mondayinspiration
We had a lovely dog walk at @sheffield_park_and_garden yesterday afternoon it’s great to take advantage of our @nationaltrust membership. Nothing like fresh air to blow the cobwebs away 😀. . . . . #nationaltrust #nationaltrustgardens #nationaltrustmember #sheffieldpark #uckfield #happyday #dogwalkinglife #lovedogs🐶 #sundaymotivation #springerspanielworld @southeastnt
Just going to put this out there - fried avocado 😋 What a tasty #breakfast!! Hope everyone has a lovely day today, we are just deciding where to take the doggies - hopefully somewhere not to muddy if that’s possible as they had a shower yesterday and are all shiny and clean!! 🐶 🐶 #healthybreakfastideas #tastybreakfast #avocado #avocado🥑 #fryup #tastyfood #tasteit #yourewelcome #discoverunder1k #discoverunder2k #sundaybrunch #sundaytjought#sundaymorning #sunraintea #lifestyleblog #lifestyleblogging #dogwalkinglife #lovedogs
@thescriptofficial omg what an amazing night!!! We were so lucky to be near the front. What a great band, great venue and great night. Thank you so much 😊💖#thescript #thescriptfamily #thescriptofficial #brightonbeach #brightoncentre #brightonresort
Wow wow wow 🤩 @thescriptofficial were sooooooo amazing at @the_brighton_centre @scriptfamily #script #brightonandhove #brightoncentre 💖
Oh I do like to be beside the seaside 🎵 the sea is a bit choppy at the moment though but looking forward to seeing @thescriptofficial tonight 😀😀😀 #brighton #goingoutout #thescript #thescriptfamily #sunsetsandfullmoonstour
Ok this won’t look like much, but to me it’s an achievement 💖 We decided to have a go at assembling an Ikea wardrobe ourselves! Most people will probably think this is easy but we aren’t the most proficient DIY-ers and weren’t very confident. Well despite getting trapped in the spare room because we couldn’t open the door - that was hilarious 😂we’d left the hammer on the landing and couldn’t move the wardrobe until we hammered the back panel on. We had to shout for help from my son 🤦‍♀️we’ve at least done the mainframe. Tomorrow we need to fix it to the wall and add the drawers and dividers. Hey Rome wasn’t built in a day 😁 #diy #diyprojects #ikea #ikeahome #ikeawardrobe #ikeaassembly #ikeaassemblyfun #whydosomepeoplefinditsoeasy
Finally we have finished the wallpapering!! What with having to dismantle built-in, but badly designed, furniture and remove all our clothing and ‘stuff’ from the room it feels like we’ve been working on it for ages. Anyone else feel like have a ridiculous amount of clothes and I wish 💭 I could be brave enough to donate/give away MOST of them 🤦‍♀️ we also need to get a carpet and furniture and lighting at some point too - I’d love to know good places to buy from please. I love a revamp don’t you? Now to (try and) choose some bedside lamps 😊 . . . . . #bedroomideas #bedroominspo #interiorstyling #superfresco #grahamandbrown #wallpaper #bedroomideas #mrshinchhome
%d bloggers like this: